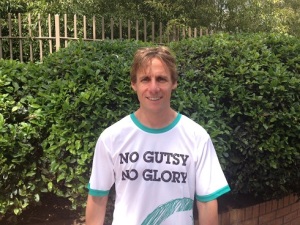 Father of four, Data Architect, marathon runner, triathlete … is there anything Craig Pager can’t do?

He’s about to tick off climbing Mount Kilimanjaro as well.

And he’s doing it for a cause close to his heart.

“My dad successfully fought myelodysplasia, which attacked his bone marrow, however this led to leukaemia. He also fought off prostate cancer for ten years. In the end, he succumbed to pancreatic cancer just six months after officially been diagnosed,” Craig explains.

On top of that, a work colleague also passed away from pancreatic cancer within the same year as his dad.

“Pancreatic cancer really has no mercy.”

An all-round fit guy, Craig was the perfect choice to represent #PurpleOurWorld.

“Exercise and a healthy lifestyle are an essential part of my daily routine. My week consists of running between 70km to 115km, swimming between 2.5km to 10km and road cycling between 50km to 300km.” Sounds easy right?

A family man, Craig understands the way the disease touches the entire extended family. Just one week before his dad’s passing, Craig’s first cousin’s mother-in-law, Rochelle Goulburn, the inspiration behind #PurpleOurWorld, passed away from the disease.

“My husband is Craig’s cousin. Knowing how fit he is and his commitment to charities, he seemed like the obvious choice for us,” Sara Kahn, Co-Founder of #PurpleOurWorld, and Rochelle’s daughter, says. “We’re really excited to share Craig’s journey with everyone and so appreciative that he has taken on the challenge.”

Craig has already completed the Sydney half marathon and will take on the Melbourne marathon in October.

He then intends to conquer Mount Kilimanjaro (5,895m) with the GI Cancer Institute’s Gutsy Challenge team. And he’s not planning on just walking.

“If all the stars align I may look at the opportunity to then run up to the top,” he says. “This will involve up to a 10-hour effort to get to the top and back down.”

And what does he hope all this climbing and running and climbing some more will achieve?

“My intention is that all these gutsy efforts lead to more awareness and importantly, funds to assist in finding a path to increase the 6% five year survival rate of pancreatic cancer.”

To help Craig get to the top, and proudly hold the #PurpleOurWorld flag up there, head to his donation page. Every amount, no matter how big or small, helps the cause.