NRL legend, NSW Hooker and Australian representative player, Robbie Farah made his NRL debut in Round 13 of the 2003 season. Until the end of the 2016 season, he played his entire professional career with the West Tigers.

Robbie is the co-founder of Mates on a Mission, raising money for those less fortunate. The money already raised has gone to the Westmead Children’s Hospital, Father Chris Riley’s Youth off the Streets and building playgrounds and gardens for autistic and special needs children throughout NSW.

In 2011, Robbie was playing representing Australia in the Four Nations in Britain. When he learned that his mother had just been diagnosed with pancreatic cancer, he was on the first flight home. 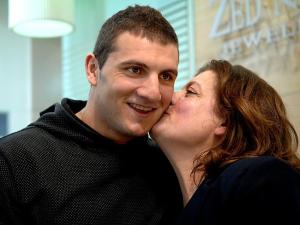 Still living at home, Robbie spent countless nights on the couch with Sonia who was unable to sleep because of her discomfort.

Scheduled to attend the NSW State of Origin clash in 2012, Sonia was instead taken to Concord Hospital. She watched Robbie’s crowning moment from her hospital bed.

In the final game that Sonia was able to watch, Robbie scored 63 tackles. His mother was 63 years old.

Fighting back against pancreatic cancer, Robbie is an ambassador for The March Charge and for #PurpleOurWorld, hoping to make the world aware of the silent killer.